Furnishings from the Paris Apartment of Suzy and Pierre Delbee

It is no secret that The Devoted Classicist is a big fan of Maison Jansen, the most influential decorators of the 20th century.  So it would come as no surprise that this writer would appreciate the apartment of one of the firm's directors Pierre Delbee and his wife Suzy.  As his reserved predecessor Stephane Boudin merged into retirement, the flamboyant Pierre Delbee, who had joined the firm about thirty years previous and had perhaps become a partner after World War II, led Maison Jansen to include more eclectic approaches to design, embracing modern as well as historical styles.  Delbee was a collector of antique objects and greatly appreciated luxurious materials and finishes;  these characteristics were apparent in the work of the firm as well as in Delbee's own avenue Foch apartment.

Although there were only four main rooms - a hall, a library, and two bedrooms - the apartment in a contemporary building had an almost palatial feeling because of the architectural detailing and furnishings.  The apartment had been featured in numerous blogs, such as The Peak of Chic which provides some additional photos, and the highly recommended book JANSEN by James Archer Abbott which includes a chapter devoted to this apartment.  But a closer look at some of the furnishings are presented here, taken from the catalog of the 1999 Christie's sale in Monaco;  the U.S. dollar amounts given are the hammer prices realized, not including buyer's fees, etc.

The entrance hall in the first image also sometimes functioned as the dining room.  The Jansen workshops produced transitional Louis XV/XVI style panelling painted in three shades of blue with glazed antique cream trim for the walls and the ceiling as well.  But the most memorable feature was the doors, also made in the Jansen workshops over a period of twenty months, inlaid with designs of an architectural theme of temples and follies with geometric trophies presented as a Surrealist ideal.


The library, serving as the only sitting room, was lined with bookcases of Brazilian red-oil wood (Myroxylon balsamum as we learned from the chapter in JANSEN) with passage doors upholstered in olive green suede detailed with strips of gilt bronze.  Suzy Lazard Delbee (reportedly a member of the family that owned the French investment firm Lazard Freres et Cie, again according to JANSEN) had a passion for antique books that was expressed here, with a collection of globes, busts, and architectural models displayed amoung the rare volumes.  But the most outstanding furnishings of this space were the almost throne-like chairs that were constantly rearranged to transform the room.
Pierre Delbee's bedroom was an intimate jewel box with the walls upholstered in dark green silk velvet trimmed with a specially woven decorative tape.  (A variation of this scheme was used in the White House Treaty Room during the Jansen decoration for the Kennedys).  The headboard of the bed was covered in a fragment of an antique allegorical tapestry.  The walls were decorated with an array of crucifixes, bas-reliefs, and portrait miniatures.  Here, the stand-out piece was a red lacquer secretaire a abattant signed by Francois Rubestuck dating to circa 1766.  The decorative, fragile piece was not usable, however, because of the narrowness of the room (as noted in JANSEN) but placed there as a work of art.
The corridor leading to Suzy Delbee's bedroom was lined with framed panels of sheet music, not included in the auction, that appear to cover concealed doors to storage.  The simple furnishings of the bedroom centered around a George I bureau-cabinet.
﻿﻿The famous Jansen 'coral' garden furniture on the terrace was not included in the sale.  The egg-shaped vase was manufactured by Sevres in 1969.

After Pierre Delbee's death, his widow sold the furnished apartment and their country home to one of Jansen's best clients, Bartolome March-Servera.  After March's death 15 years later, the furnishings were dispursed at this 1999 auction. 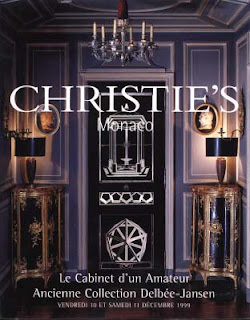 All the photos in this post are from Christie's publications.
Posted by John J. Tackett at 8:38 PM