As a tie-in to the last post of The Devoted Classicist, here is another essay about yet another historic London house and an auction of its contents.  Fortunately, the mansion is still extant this time, and it is for sale.  (The "guide price" is GBP 12,000,000 or about $19 million).  And the contents will be sold with an upcoming auction in Edinburgh, Scotland, next month.  It is regretful, however, that we missed the opportunity to see the lots in situ last weekend when there was a public viewing at Old Battersea House.

When it was built, 1699 or even earlier, the Thames riverside property (now separated from the water by a roadway) was surrounded by fields.  Much of the land belonging to the handsome manor house was sold in the 1920s after being vacated by St. John's College, a Church of England college for priests.  Although the architect is unknown, the possibility of being designed by Sir Christopher Wren has been considered as the house does match his style.  The local authority, the Battersea Council, bought the house from the college and would have demolished it and built what we in the U.S. call a housing project had it not been for the public outcry.  An Act of Parliament saved the house from demolition.

The leaders of the fight to save Old Battersea House were Col. Charles G. Stirling and his wife Wilhemina.  They lived in the house, leased from the Council, starting in 1931 until her death at almost age 100 in 1965.  (The Stirlings' collection of paintings, ceramics, and furniture was bequeathed to the De Morgan Foundation and is on view at the nearby West Hill Library).  But the house fell into disrepair and languished until Malcolm Forbes acquired a 99 year lease in 1971.  (Freehold ownership was later acquired from the Battersea Council).
Architect Vernon Gibberd and later, son Christopher "Kip" Forbes, restored the house, adding modern amenities, to serve as the Forbes family's London home as well as housing one of the world's most important collections of 19th century British art.  Elizabeth Taylor was a frequent guest, staying in the (queen size canopy bed, see photo below) Red & White Bedroom, and President and Mrs. Regan once stayed in the (twin beds, see the link to The DiCamillo Companion) Black Bedroom.  (Readers will want to see the video, linked below, to view the Black Bedroom, named for the walls, curtains, and beds all upholstered in flowered chintz with a black background).  The State Bedroom had a display of art in tribute to Queen Victoria;  the adjoining bathroom had a display of the Queen's personal garments.

Many of the works of art from the Forbes collection that had been displayed at Old Battersea House, along with antiques and furnishings of more recent date, will be sold in the November 1, 2011, auction by Lyon & Turnbull, Sale 338.   Unless otherwise noted, all these images come from their site;  the 508 lots can be viewed on their on-line catalog of the sale here.  A few highlights follow:

The model by C. Herman Bruckner dates from the late 19th century and includes 31 figures of horse-mounted guards, standing guards, dogs, and the home owner with his family and servants.  The estimate is GBP 15,000 - 20,000.

The oil on panel portrait was painted by the British artist Dante Gabriel Rossetti and is dated 1861.  Remarkably, it still has the original giltwood mat and "thumb print" frame designed by the artist.  The estimate is GBP 80,000 - 120,000. 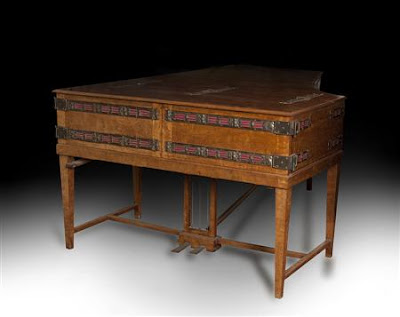 This bed, circa 1880, in the Red & White (Master) Bedroom has red and ivory silk hangings.  The room was favored by Elizabeth Taylor and she spent her seventh honeymoon here with husband Larry Fortensky.  The estimate is GBP 8,000 -12,000.

The personal garments are usually destroyed after the Sovereign's death, so these knickers, embroidered in blue with a crown and 'VR2' on the waistband, are the only known survivors.  The estimate is GBP 2,000 - 3,000.

An excellent video overview of the house and contents was produced for the auction.  The 14 minute highly recommended film is hosted by Curt DiCamillo, an expert on historic architecture and decorative arts as well as a friend of Kip Forbes (and The Devoted Classicist).  It can be viewed here here.  And there is a second video, almost 7 minutes, that features just the paintings that can be viewed here.

The facts of the house's history came from the most informative site, The DiCamillo Companion, and more can be read here.  More about the features of the Grade II listed house today can be found at the site of the real estate agent, Savills, here.
Posted by John J. Tackett at 7:36 PM