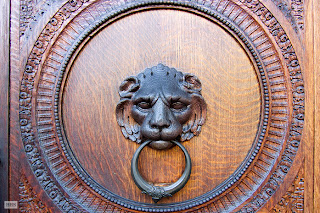 For those less troubled by these current financial times, there is a good selection of architecturally significant townhouses for sale on Manhattan's Upper East Side.  Among the current offerings are single family residences by some of the most famous architects of the twentieth century:  McKim, Mead & White, C.P.H. Gilbert, Delano & Aldrich, and Paul Rudolph.

The limestone Renaissance Revival house at 973 Fifth Avenue was completed in 1907 to the design by the prestigous architectural firm McKim, Mead & White.  Although there are some conflicting reports in current information, the house is believed to have been commissioned by Henry H. Cook, a railroad tycoon and banker who owned the whole block from Fifth Avenue to Madison Avenue, East 78th Street to East 79th Street.  After several years of poor health, Cook died of pneumonia in 1905 at his Lennox, Massachusetts, estate "Wheatleigh" (by architects Peabody & Stearns with landscape by Frederick Law Olmstead), and the house was occupied on completion by one of his four daughters, Georgie (with stables at 103 East 77th Street, on the site where a Christian Scientist Church now stands).

The next owner was Colonel Oliver Hazard Payne, a major partner in Standard Oil and a director of Chase National Bank along with numerous other interests.  Colonel Payne gave the adjacent lot at 972 Fifth Avenue to his nephew Payne Whitney and his wife Helen Hay along with $600,000 towards construction of a house, also designed by McKim, Mead & White.  Helen Whitney occupied that house until her death in 1944.  Their children were Joan, Mrs. Charles Shipman Payson, and Jock, John Hay Whitney, whose homes will be discussed in future posts of The Devoted Classicist.

The architectural firm of McKim, Mead & White was one of the most respected and prolific firms of the day.  Real estate agents almost always attribute the design to Stanford White, but he did bring in many of the residential commissions and is actually very likely to be the responsible partner here.  In any case, the interiors show some of the refined Renaissance and Louis XVI detailing for which he is well known.

After studying at the Ecole des Beaux-Arts, Charles Follen McKim worked at the office of Henry Hobson Richardson before going into partnership in 1873 with William Rutherford Mead who had studied the Renaissance in Florida.  Stanford White, who also worked for Richardson, joined McKim and Mead in 1879 after a year and a half in Europe.  One of the firm's most famous buildings in its day was the second Madison Square Garden, 1890-1925, where White was murdered in 1906, shot in the rooftop restaurant by millionaire Harry Kendall Thaw over the affair with Thaw's wife, the actress/model Evelyn Nesbit, with the story incorporated into a number of books and films including THE GIRL IN THE RED VELVET SWING and RAGTIME.  Other Renaissance Revival Manhattan houses by McKim, Mead & White include the Joseph Pulitzer Mansion at 11 East 73rd Street, and the Villard Houses, a palazzo-like townhouse complex of six residences at 451, 453, 455 & 457 Madison Avenue and 24 & 26 East 51st Street, now offices and part of the Palace Hotel.

The seller is the estate of Victor Shafferman who died in 2009; he bought the house in the 1970s for $600,000 according to reports.  Mr Shafferman was a businessman, partner in the ownership of commerical real estate and apartment buildings, believed to be born in Palestine (although Switzerland was sometimes given) and raised in Canada.  This writer had met Mr Shafferman in a social context as we had several mutual acquaintances;  the most memorable aspect of the meeting was that he almost immediately mentioned that he owned the last privately owned single family townhouse on Fifth Avenue, apparently a common practice.  Neither I nor any of my friends were ever invited there, however, and no one ever knew of any entertaining there during this period in the 1980s and 90s.  In fact, there was never any sign of life at the house, no open curtains or even a light on, although the exterior was at least moderately maintained.  (Although details are murky, the late Mr Shafferman is believed to be the force behind The Foundation For Classical Architecture, Inc., which owns "Blairsden", a 38 room mansion designed by Carrere & Hastings on 50 prime acres in Peapack-Gladstone, New Jersey, currently listed for sale here.)

973 Fifth Avenue is offered for sale for $49 million by Brown Harris Stevens and the details of the listing may be viewed here.

The forty-five feet wide limestone Renaissance Revival townhouse at 22 East 71st Street was completed in 1923 for Julius Forstmann, owner of the F Woolen Company in Passaic, New Jersey, designed by architect CPH Gilbert.  In recent years, the house had been rented by Lawrence Salander for the Salander-O'Reilly Galleries for $154,000 per month until charges of fraud closed the business.  The last use was for the 2009 Kips Bay Designer Showhouse with the theme being a tribute to long-time supporter of Kips Bay Boys and Girls Club, the legendary decorator Albert Hadley.

Charles Pierrepont H. Gilbert studied at Columbia University and the Ecole des Beaux-Arts, practicing architecture in the Colorado and Arizona mining regions before returning to his hometown of New York City around 1885.  After service in the Spanish-American War of 1898, he continued designing opulent townhouses and mansions with great success.  Two of Gilbert's best known remaining residential commissions in Manhattan are the Joseph Raphael De Lamar House at 233 Madison Avenue, now the consulate for the government of Poland, and the Felix M. Warburg House at 1109 Fifth Avenue, now the Jewish Museum with a matching 1993 addition by Kevin Roche, John Dinkeloo & Associates.

22 East 71st Street is currently owned by developer Aby Rosen and offered for sale for $50 million, reduced from $75 million.  The listing through Sotheby's International Realty may be viewed here.

An unusual townhouse by the architectural firm of Delano & Aldrich that had been long admired by The Devoted Classicist is located at 120 East 78th Street.  In fact, the entrance is so unique that this writer has wondered if the house is an extensive renovation instead of a new construction by the famed architects, having to deal with the floor heights of an earlier townhouse.  The real estate listing states the construction date of 1930, with the first owner being Harry Rogers Winthrop, a descendant of  Governor Winthrop of the Massachusetts Bay Colony.

Both William Adams Delano and Chester Aldrich studied at Columbia University and the Ecole des Beaux-Arts;  they met while working at Carrere & Hastings.  With Aldrich's family connections (he was a relative of Jr's wife, Abby Aldrich Rockefeller), the office was renown for its remarkable country houses, both grand and more modest, but always in impeccable good taste.  (See the home of legendary decorator Ruby Ross Woods in the August 25, 2011, post of The Devoted Classicist here).  Other Manhattan houses by Delano & Aldrich include the Francis Palmer-George F. Baker Jr. House, a stately 3-phase mansion at 75 East 93rd Street with the main house and ballroom wing now owned by the Russian Othodox Church Outside of Russia and the garage/guest house now part of the residence of noted preservationist and classic house collector Dick Jenrette (whose Millford Plantation was featured here).  And another great house is the Willard Straight Williams at 1130 Fifth Avenue, once occupied by the legendary hostess Mrs. Harrison Williams, the National Audubon Society, and the International Center of Photography before becoming a private residence again, now home to commodities tycoon Bruce Kovner.

120 East 78th Street is currently offered at $26 million.  More information can be seen at the Brown Harris Stevens website here.

Although not in the classical tradition, the townhouse at 101 East 63rd Street is none-the-less one of the favorites of The Devoted Classicist.  Originally, it was a 19th century building that was completely renovated by architect Paul Rudolph as a very sleek, contemporary townhouse.  Completed in 1966 for Alexander Hirsch and Lewis Turner, it features a garage, rooftop terrace, and a double-height living room.  The house is most often associated with its next owner, the fashion designer known as Halston.  In Rudolph's original design, there were no railings for the stairs, loft and cat-walk which must have really added to the drama of the celebrity gatherings during the Halston era.  Renovation by the next owner, Gunter Sachs who bought it in 1990 (and briefly owned it in partnership with Gianni Agnelli before buying out his share) added glass balustrades, however, except for the stairs.


Paul Rudolph earned a bachelor degree in architecture from Auburn University in 1940, and a Master's from Harvard Graduate School of Design in 1947, interupted by three years in the Navy.  For six years, he was dean of the Yale Art and Architecture School, located in the building he designed, his most famous work.  His architecture was in the Brutalist Style and influenced many commercial and office buildings around the world.  Rudolph died in 1997 at age 78 of peritoneal mesothelioma, a cancer linked to asbestos exposure, a fire-proofing material commonly used in his work with exposed interior structure.  His own 1973 home, a penthouse at 23 Beekman Place, is visible from the FDR Drive along the East River;  it is the private residence of Steve Campus.  Rudolph's 1989 townhouse, which he shared with partner Ernst Wagner, is located at 246 East 58th Street, now home to the Paul Rudolph Foundation and occassionally open to the public.

The estate of one of the original owners Lewis "Sonny" Turner made a gift of approximately 750 documents relating to the construction of the house to the Library of Congress.  The documents include 19 groups of architectural drawings and renderings, 3 pen & ink drawings, and 109 photographs.  At present, these documents are not digitized for on-line viewing, but may be seen by appointment.  For more information, see the Hirsch/Turner/Halston Townhouse Documentation at http://www.loc.gov/pictures/item/2011661902/.
The last owner Gunter Sachs, photographer, art collector and former husband of Brigitte Bardot, took his own life in May, 2011, at age 78, at his home in Gstaad, Switzerland, according to published reports.  The property is offered by his estate for $38.5 million through Cocoran.  Current photos of the interior and more information can be seen at the real estate website here.

Decisions, decisions.  Considering the architecture and the location, but disregarding all the financial factors, which Manhattan townhouse would you choose?
Posted by John J. Tackett at 7:40 PM