One of the great, if not greatest, decorative painters of the 20th century was Reginald John 'Rex' Whistler, 1905 to 1944.  Perhaps better described as a muralist in the context of this post of The Devoted Classicist, he also painted portraits and landscapes, illustrated books, and designed theatre sets.
﻿

Born in Eltham, Kent, he showed a talent for art at an early age.  After a short, unsuccessful term of study at the Royal Academy, he moved on to the Slade School of Art, often considered the United Kingdom's premier Art and Design educational institution.  There, he met Stephen Tennant, the British aristocrat who was one of the inspirations for Lord Sebastian Flyte in Brideshead Revisited.  Through this friendship and his being part of 'The Bright Young Things' social group, commissions began to come his way.
At age 23, Rex Whistler finished his first big commission, "The Expedition in Persuit of Rare Meats" for the basement cafe at the Tate Gallery.  Financed by a GBP 500 donation by art and antiques dealer Joseph Doveen to encourage similar commissions to other young artists, the scheme was a big success at its 1927 unveiling.
﻿
Novelist Edith Oliver collaborated on the subject of the mural, recounting the expedition of a group of seven people who set out in search of exotic meats.  After trekking through exotic lands, the travellers return to the 'Duchy of Epicurania', transforming the diet of the people who had previously eaten only dry biscuits.  The mural survived the 1928 flooding of the River Thames thanks to the combination of oil paint mixed with wax and turpentine. 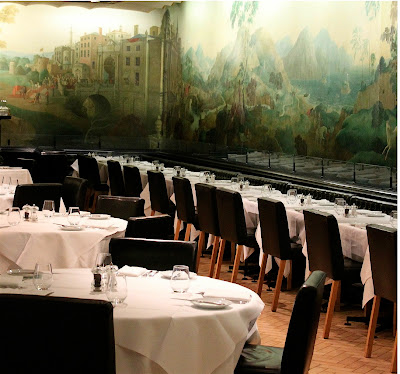 The space is now known as The Rex Whistler Restaurant;  it is closed for refurbishment until 2013, however. 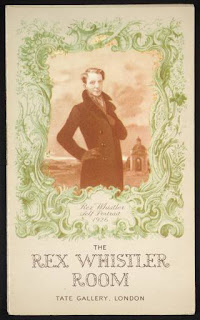 One particularly successful commission for a fully painted room was given by Sir Phillip Sassoon for his mansion Port Lympne near Hythe, Kent.  Originally named Belcaire, the Edwardian, South African Dutch Colonial style house by architects Baker and Wilmott was renamed in honor of Portus Lemanis, the area's Roman name.  Sir Phillip was one of the great aesthetes of the early 20th century, a member of the family known as the "Rothschilds of the East", according to The DiCamillo Companion.
﻿
The Port Lympne project was unique in that the ceiling was shaped to conform to the design of a tent and decorated as part of the mural project.  Poles and the paired tassels are real, but the other decoration on the walls and ceiling is painted.  The original use of the room is believed to be for dining.
﻿
The room remains and was restored in recent years by experts from the Tate Museum.  The mansion and grounds are now rented for events and conferences.  The surrounding property is a preserve for endagered species of animals and is known as the Port Lympne Wild Animal Park.

﻿
Brook House, a remarkable block of luxurious apartments on Park Lane in Mayfair was erected between 1933 and 1935 on the site formerly occupied by a mansion that had been inherited by Countess Edwina Mountbatten.  The top two floors contained the penthouse flat of Edwina and her husband Louis, the 1st Earl of Mounbatten, decorated by Mrs. Joshua Cosden of New York (whose husband, the Tulsa Oil King had lost his fortune in The Depression, necessitating her entrance into a career) in collaboration with Victor Proetz.
﻿
Lady Mountbatten's boudoir walls featured panels painted on canvas in silver and grisaille, depicting scenes of family homes and various personal interests.  Her initials were also incorporated into both the ceiling medallion and the radiator grille, further personalizing the room.  Although the building was bombed during World War II, the wall canvasses had already been removed in 1939.
﻿﻿
The murals at Plas Newydd near Llanfairpwllgwyngyll, Isle of Anglesey, Wales, are considered Rex Whistler's masterpiece.  Commissioned in 1936 by the Marquess of Anglesey for his country seat, the house originated in the 14th century and was altered by James Wyatt in the 18th century.  The 7th Marquess of Anlesey still retains rooms there, but it has been owned by the National Trust since 1976.
﻿
The large Dining Room at Plas Newydd has a fireplace on each end wall and windows on one long wall looking out to the Menai Straits and the mountains of Snowdonia.  The view is often obscured by weather, however, so the blank fourth wall was the ideal candidate for a mural with a harbor scene where it was always the perfect day.  The scene is floor to ceiling, 58 feet long.
﻿
The end walls of the Dining Room are painted in trompe-l'oeil as well.
﻿
﻿
﻿
The artist included a representation of himself, with a broom rather than a paint brush.  Another representation is a young boy stealing an apple;  it was the son of the Marquess, now the current Marquess of Anglesey.﻿

Even the ceiling received a trompe-l'oeil treatment by Whistler.  As a framing accent, the cornice of the room is gold-leafed.﻿
Rex Whistler's mural at Plas Newydd is painted on canvas.  Some of the work was done in his London studio, and some in situ.  Some have written that Rex was the lover of the Marquess' daughter, Lady Caroline Paget who was 23 at the time.  (They had known each other before the commission).  Others say that Whistler's love for her was not returned and was symbolized in the mural with a pair of swallows taking flight and rose petals on the ground.  The collection of Plas Newydd includes a nude portrait of Lady Caroline by Whistler as well as his letters to her.

Mottisfont Abbey is a rural estate near Romsey, Hampshire, with grounds alongside the River Test, a notable chalk stream, and with walled gardens housing the National Collection of old fashioned roses.  Now owned by the National Trust, the last private owner was society hostess Maud Russell who bought the property with her husband Gilbert in 1934.  A wealthy patron of the arts, Mrs. Russell commissioned several artists to embellish the mansion which had incorporated parts of an Augustinian priory dating fromt he 13th century.  A connection with Evelyn Waugh's set of 'bright young things' led to her meeting Whistler.  In 1938, Rex Whistler transformed the original Entrance Hall into a grand Drawing Room with trompe-l'oeil painting inspired by the Gothic architecture of the demolished priory.  ﻿
The mural was personalized by Whistler to illustrate Maud Russell's interests, as shown with this view of a niche containing books and a lute along with an ermine-draped urn.  The puffs of smoke refer to her distaste of bonfires.
﻿
Rex Whistler's final mural of this type, he added this note in small print:  "I was painting this ermine curtain when Britain declared war on the Nazi tyrants, Sunday, September 3rd. RW"   Small objects were left, as seen on the cornice of the room in the image above, to suggest that the artist would return.

More of the artistry of Rex Whistler will be presented a future post of The Devoted Classicist.