As Part Two of the previous post of The Devoted Classicist, "Notable Homes: Mildred and Charles Allen Jr at 2 East 67th Street", this takes a closer look at the specific furniture and the interior design by Stephane Boudin of Maison Jansen, the legendary Parisian decorating firm.  As necessary, click on the link to go back to see an overview of the apartment building and a typical floor plan.
The Entrance Hall Gallery was not pictured in the catalog other than a glimpse in this mirror over the fireplace shown below.  In JANSEN, author James Archer Abbott describes the space as having doors made in the Paris ateliers of Maison Jansen with the double doors (as seen in the reflection) having plain surrounds, but the single doors having pediments of mirrored glass and gilt-bronze trelliswork.  Also added by Jansen was a white marble chimneypiece and the new ceiling with a lighted recessed oval;  the supply grilles for the central air-conditioning in all the major rooms were carefully considered and this ceiling most certainly concealed the ductwork.

The Salon was located at the corner of Fifth Avenue and East 67th Street overlooking Central Park and panelled with fragments of 18th century boiserie with new elements made by Jansen as required to fill out the space.  Just as remarkable as the woodwork itself was the paint finish, a watery antique green sometimes called "Eau de Nile" with the mouldings picked out in ivory.  In the book JANSEN, the author relates that former Versailles curator Gerald Van der Kemp told him that the green was Boudin's favorite color for a room. 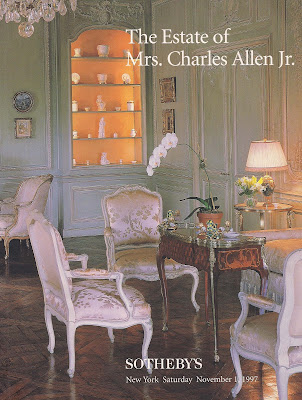 As attractive as the Salon was, the Dining Room was even more spectacular.  The simple Louis XVI panelling for the almost-square room was antique, featuring decorative medallions incorporated into the design.  It was the fantastic paint finish, expertly antiqued in two shades of light blue and old white, that marked the success of the space, however, and provided such a brilliant background for the painting of waterliles by Monet, planned for the north wall opposite the fireplace from the beginning.
The Library was lined in new Louis XVI style panelling painted a buttery yellow to coordinate with the antique yellow and white chimneypiece, both supplied by Jansen.
Secondary furnishings such as modern upholstery were not included in the sale.  Nor were carpets;  Boudin would have certainly supplied either antique rugs or handmade reproductions for these principal rooms.
The art from the Allens' apartment was sold in three separate auctions according to the appropriate category:  Important Old Master Paintings, Old Master Drawings, or Impressionist & Modern Art.

Unless noted otherwise, all the images are from the Sotheby's sales catalog THE ESTATE OF MRS. CHARLES ALLEN JR. for the auction that was held November 1, 1997, in New York, Sale 7077 "ALLEN".  Upcoming sales can be previewed on-line at their website.
The book JANSEN by James Archer Abbott was published by Acanthus Press, New York, 2006.  It may be purchased at a discount with the option of free shipping through The Devoted Classicist Library.
Posted by John J. Tackett at 6:48 PM