An Invitation to the Finest Rooms 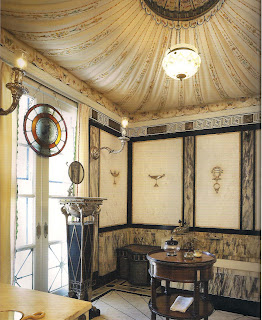 Thomas Jayne -- friend, author, interior designer, decorator, and sometimes collaborator -- will make a presentation of The Finest Rooms in America this Friday, January 21, 2011, at 4 p.m., as part of the lecture series of the Winter Antiques Show in New York City.  The talk will highlight the individuals and their distinguished collections featured in his new book of the same title.  The location is the glorious landmarked "Tiffany Room" of the Park Avenue Armory, Park Avenue at East 67th Street.  Seating is on a first-come basis and is complimentary with Show admission of $20 (to benefit the East Side House Settlement).  A book-signing reception follows.  For more information, see http://www.winterantiquesshow.com/ and click on Special Events. 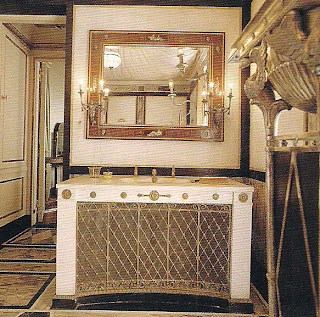 For those who are not able to attend, there is the book which features fifty of the most attractive and influential rooms in the U.S. from the past two hundred years.  Starting with the Tea Room at Monticello and ending with a Sitting Room in Albert Hadley's apartment, there is an eclectic mix of extant rooms from a diverse range of periods and styles, with extant being a key word.  Both public and private rooms are shown, with my favorite U.S. house museum, Vizcaya, represented by the Master Bathroom, shown here in the first two photos.

Vizcaya's bachelor owner, James Deering of the International Harvester fortune, and his companion collaborator, the incredibly talented Paul Chalfin, created this fantastic estate, then on the outskirts of Miami, and started spending winters there in 1916.  Architect F. Burrall Hoffman, Jr., and landscape designer Diego Suarez helped realize the magnificent and exotic tropical estate that once empassed 180 acres.  The walls of this bathroom are panelled with three types of marble with silver decorations.  The ceiling is tented with linen embroidered with Pompeiian motifs.  The most memorable feature of the lavishly handsome room, however, is the shaving stand in the form of an antique brazier, seen in the first photo.  This house is open to the public and is not to be missed if you ever travel to the area;  actually, it is even worth a trip as a destination. 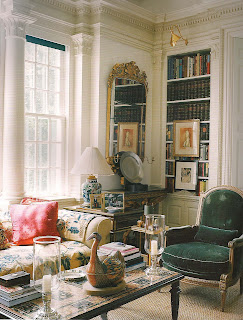 No decorator is credited with the furnishing of the Master Suite of the Kent, Connecticut, home of Annette and Oscar de la Renta pictured above.  Annette de la Renta was a long-time client of Parish-Hadley, in both her present and previous marriage, as her mother and Sister Parish were life-long friends.  But Mrs. de la Renta is now her own chief designer for her interiors, often calling on various interior designers to do particular aspects of a room.  For example, one person might be called on for locating a specific piece of furniture, another for arranging furnishings and selecting fabrics, and another to supervise fabrication and upholstery, I am told.  The results are certainly as individual as they are stylish. 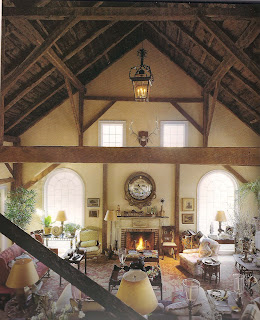 Another favorite room in the book is the collaboration of two of this country's most influential design talents, Bunny Williams and John Rosselli.  It is the 30 by 50 main room of the renovated 1840s barn on their property in Falls Village, Connecticut.  One of the top interior designers, Bunny owned the property with her former husband and used the building as a garage and shed for garden equipment.  After her marriage to John, a now-not-so-secret-trade-source for decorative furnishings, the two were able to combine their incredible talents on this space, a contrast to the relative low-ceilings of the historic main house.  The hospitable couple created a lovely, yet remarkably comfortable, room for entertaining with a delightful mix of informal furniture, shapes, colors, and textures. 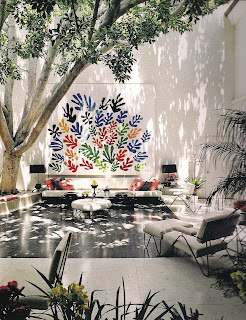 Readers of The Devoted Classicist might be surprised that I would be enthralled by this outdoor room featured in the Introduction.   It is from the Frances Brody House, Los Angeles, decorated by Billy Haines, the former silent film star.  But it can be analyzed as a classical space;  it just has a modern vocabulary.  Modestly, Thomas Jayne has included only three photos of his own work, and they are confined to small images in the Introduction, which also includes his thoughts on design philosophy and how they were formed. 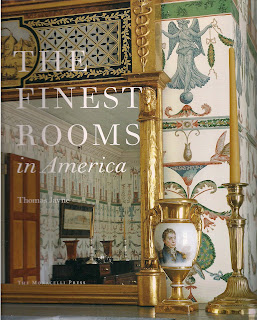 All photos are from The Finest Rooms in America by Thomas Jayne with Anne Walker, published by The Monacelli Press, 2010, a book that is highly recommended for all who appreciate the study of decoration, past and present, or "ancient and modern" as Thomas would say.

Thomas Jayne's book THE FINEST ROOMS IN AMERICA can be purchased at a discount of 37% off the published price with the option of free shipping by clicking here to visit The Devoted Classicist Library.
Posted by John J. Tackett at 11:10 AM 44 comments: 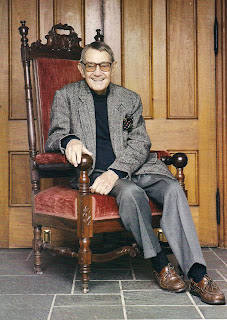 Several blogs and newspapers wrote about last November's event to benefit the outreach ministry and programs of the Southport (Connecticut) Congregational Church, "Rooms with a View, 2010".  This past year it honored Albert Hadley, the "Dean of American Design" with the collection of vignettes titled "The Dean's List".  Albert Hadley was my Best Boss Ever, but I had not started my blog in time to write about the event.

The current February "Architectural Digest" features a short article on the event, however, so I considered that eligible for a posting.  The photos above and below come from that magazine in an article written by Mitchell Owens titled "Master Class".  My friend and sometimes collaborator Thomas Jayne had a very small space decorated by fabulous inkblots, like a Rorshach test.  I provided a sketch of his ideas for the space as the illustration for the catalog that accompanied the exhibition, so I had a hint of what was to come.  But the results were fantastic in reality, as all, including Mr. Hadley, agreed. 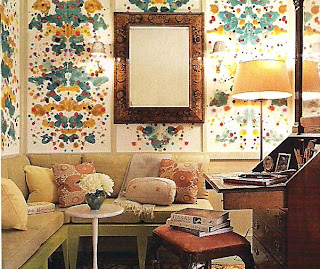 Other friends who participated were Libby Cameron, Susanne Earls Carr, David Kleinberg, Brian McCarthy, Michael Whaley, and Bunny Williams.  Others, who were either before or after my tenure at Parish-Hadley, were Pamela Banker, David Easton, Thom Filicia, Harry Heissman, and Brian Murphy.  Five more vignettes are shown in the article, all showing an influence of the great Albert Hadley, so take a look at the magazine, now on news stands.  It is a treat for the devoted classicist.
Posted by John J. Tackett at 3:19 PM 10 comments:

Mid-Winter With Gardens on My Mind 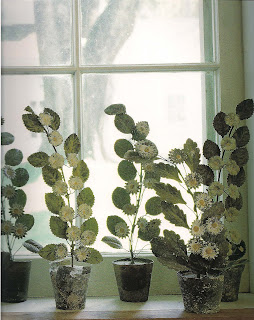 This past week, I officially passed on the gavel, ending my term as President of the Memphis Horticultural Society.  For those who enjoy reading about gardening, the organization's newsletters are available on-line at http://www.memphishorticulture.org/.  Readers of this blog might particularly enjoy the description of my favorite private garden in the U.S. that I described in the President's Letter of the September, 2010, newsletter "Clippings" which can be viewed by visiting the site. 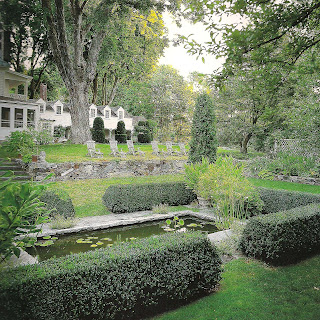 As some may guess from the photos, the garden that I have written about belongs to interior designer and author Bunny Williams and her antiques dealer husband John Rosselli.  The first photo shows antique tole flowers in pots on a window ledge at the Manor House, Bunny and John's weekend house in Litchfield County, Connecticut.  And the second photo shows a portion of the sunken garden, an outdoor room with a wonderful stone retaining wall on one side and lattice walls on the other three;  trimmed boxwoods around the lily pool form a room-within-a-room.  (The photo is reversed, for those who have visited). 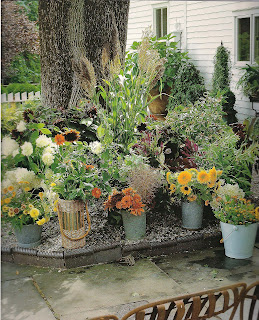 My very minor contributions from years ago, a drawing for a fence, a bench, an arbor, etc., are all still part of the scheme for the remarkable series of gardens to form a collection that Bunny has created and beautifully maintained.  All these photos and more, along with the whole story of the property, are delightfully presented in An Affair With A House, written by Bunny and published by Stewart, Tabori & Chang, New York.  The book is one of the best of its kind and highly recommended for all house and garden lovers.  And yes, it is pleasing to the most devoted classicist. 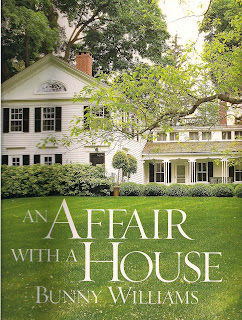 For The New Year Baby 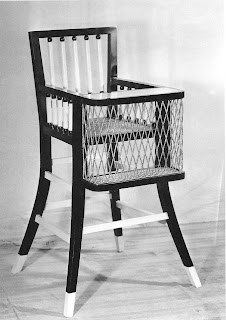 Mealtimes, regardless of the time of day, would be considerably more stylish if one had this Egyptian-inspired highchair, circa 1930, from Maison Jansen.  I presume the lacquered paint finish simulates ebony and ivory, a classic combination that is hard to beat.  Add a quilted fabric lining for protection, and 2011 should be off to a good start.

This photo is from the section on Modern Seating from Jansen Furniture by James Archer Abbott, the 2007 companion volume to Jansen published the previous year, both by Acanthus Press.  James tells us that, in addition to the inventory of period furniture for sale in both the Paris and New York City showrooms, Jansen had their own workshops that could create furniture especially for a certain commission.  In additon, seating frames were sometimes purchased from other sources to be finished in Jansen ateliers, but surely this was custom made for a specific client.  Sadly, I know nothing of the residence for which this highchair was intended, but it must have been spectacular. 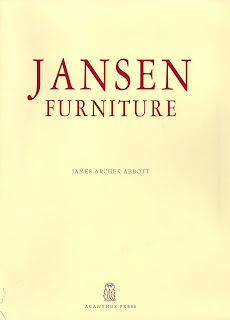