With snow falling in New England, it is partly sunny and 85 degrees today in Palm Beach, Florida.  So it is as good time as any to present a project from a number of years ago that is a well known mansion locally, but not otherwise widely familiar.  With a listing price of $75 million, it was once the most expensive home in the nation.  (That price was surpassed when Donald Trump heaved the house next door on the market for $125 million;  see my December 13, 2010, post for more on the legendary house Blythedunes which formerly occupied the neighboring site.  But that is another story).
Montsorrel was completed in 1969 after five years of planning and construction with design by French architect Jacques Regnault and Stephane Boudin of the legendary interior design firm Maison Jansen.  Boudin died in 1967 without seeing the project complete.  Regnault and Jansen were frequent collaborators with the most visible U.S. project being the building for society jeweler Harry Winston on Manhattan's Fifth Avenue.  The oceanfront estate with 608 feet of private beach sits on about seven acres, though some reports say 15 with perhaps the discrepancy being that the property is on both sides of North County Road.  There are also variations on the square footage, from 35,000 to 44,000 for the main house, and 12,000 to 16,000 for a later guest house/entertainment pavilion.  Plus there are additional service buildings and a caretaker's gatehouse.  In any case, The Devoted Classicist can definitely say that the mansion is immense and truly luxurious.﻿﻿
The original owner, Anita Ten Eyck O'Keeffe Young, was the widow of Robert R. Young.  They had started the project together, but Mr. Young shot himself in 1965 in the house that was previously on the property.  Local legend blames the suicide on a impluse after a mistaken belief﻿ that he had lost his fortune.  Mrs.Young named the estate Montsorrel in his memory;  the main house sets on a slight rise and the name translates as "Mountain of Sorrow".  Robert R. Young was a Texas-born businessman who had a successful Wall Street career before becoming a railroad baron, heading both the Chesapeake & Ohio Railway and the New York Central Railroad.  He introduced high-speed diesel powered passenger trains as well as the first large-scale railroad computer system.  Their only child was Eleanor "Cookie" Young, the first of the Great Depression era "G﻿﻿﻿lamour Debutantes", presented in 1936 at their Newport, Rhode Island estate.  In 1938, Cookie was a 21 year old divorcee after an eight month marriage to socialite Robert Odgen "Bunty" Bacon.  She was killed in a 1941 plane crash.
Anita O'Keeffe Young, sister of painter Georgia O'Keeffe, was a noted hostess and philanthropist.  She was a close friend of the Duke and Duchess of Windsor who were frequent guests.  The Jansen decoration, which was still intact during my participation in the project with the exception of the furniture and art, included upholstered walls in the premier guest room in a fabric with a Prince of Wales feather motif;  a small room adjoined for his valet.  The second guest room, decorated for Wallis, also had an adjoining room for her personal maid.  There is a large wing with other servants' quarters but with no direct connection to the three principal bedrooms on the second floor.
I was brought onto the project by interior designer Bunny Williams to make some sensitive architectural adaptations for a couple with a young child in addition to grown children by a previous marriage.  More on these John Tackett Design improvements will be featured in a future post.

Although there are relatively few principal rooms in the main house, all are particularly large.  The ceiling heights on the ground floor are fifteen feet and the flooring in all the principal rooms are antique parquet de Versailles, reportedly from the very palace.  The walls of the living room are clad in green and white marble slabs installed in a pattern of panelling.  With a flick of a switch, the chandelier can be lowered for maintenance.  Twin loggias facing the ocean each have a glass wall that can be raised from the basement to provide protection from the ocean spray.  These photos are all from Sotheby's DOMAIN magazine, 2001, and show alterations in both Jansen's and Bunny Williams' decorative schemes.
The swimming pool is located in a travertine-paved walled courtyard with sliding glass panels to block strong ocean breezes.  Salt water can be pumped from the ocean, and heated to the desired temperature if necessary.  Also, there is a canopy that extends over the west side of the huge pool so laps can be done in the shade. 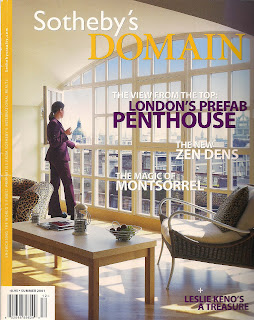 Mrs. Young died in 1985 and the contents of Montsorrel, along with her palatial Newport summer estate Fairholme, were sold in two celebrated auctions at Sotheby's.  (She had donated her earlier Newport home Ochre Lodge to Salve Regina University in 1966).  When Montsorrel was first listed for sale for $18 million, it was the most expensive house to that date in the eastern United States.  But the high taxes and expense to maintain the estate made the house less than appealing.  In the spring of 1987, it finally sold for $13.5 million. 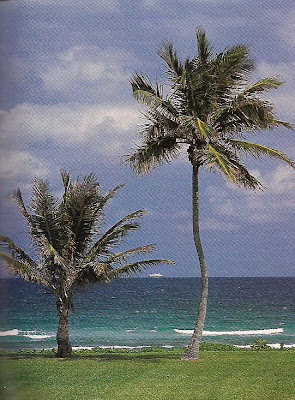 Montsorrel remains a private home today and tall hedges prevent much of a street view of the main house, but a glimpse of the circa 1990 guest house/entertainment pavilion across the road might be seen down the driveway.  Some might find the satellite views of 545 and 548 North County Road interesting, however.  Fairholme is located at 237 Ruggles Avenue, Newport, Rhode Island, and was listed on the market last year for $18 million.  Harry Winston, Inc., is located at 718 Fifth Avenue, New York City;  the 1959 alteration of an earlier building has provided an identity that has been duplicated in their stores world-wide.
Posted by John J. Tackett at 4:32 PM