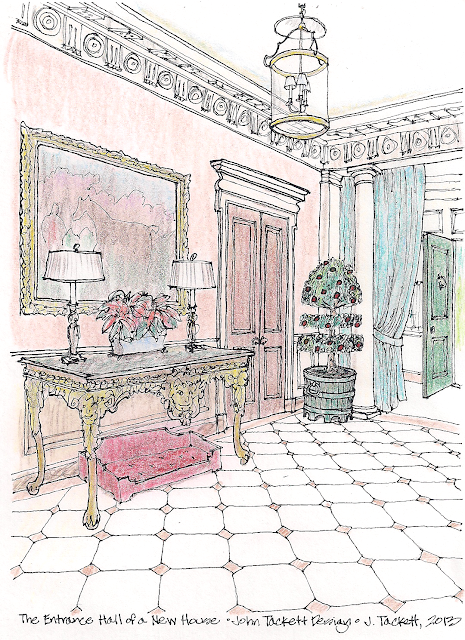 Best wishes for a very

and a happy New Year!

My special thoughts go out this time of year to my Devoted Readers and those who just happen upon The Devoted Classicist blog.  2013 has been a year to remember, with as many ups as well as downs.  But that is life.  Although there is still a lot in store for me during the remainder of the year, I can hardly wait for what 2014 will bring.
The sketch for this year's card is from studies done for a series of new house designs for 'Empty Nesters' and those wanting a smaller residence but still one with architectural features to coordinate with their artwork and furnishings.  Sizes would range from about 1800 square feet to 2800 square feet.  Although the project has yet to really get off the ground, I feel that there is still great potential in many parts of the country.
Again, many thanks for your readership.  You are all greatly appreciated.
__ John J. Tackett﻿
Posted by John J. Tackett at 7:42 AM 8 comments:

In this season of so many particularly fine, newly published design books, one that really stands out is LUMINOUS INTERIORS by Brian J. McCarthy.  Brian, who was recently named to Architectural Digest's AD100, and I are friends from our days as co-workers at Parish-Hadley.  He launched his own firm Brian J. McCarthy, Inc. in 1992 and this, his first book, features his interior design for nine spectacular residences.
Brian J. McCarthy is a decorator and designer in the true sense, a big step above the standard in the field who is essentially a salesperson/expediter, and only orders factory-made furniture from catalogues and sells fabric from swatch books.  For example, Brian didn't just paper the walls of the Powder Room of a 1930s Regency Revival house but had them Venetian plastered and stenciled in gold and inlaid with mother-of-pearl and abalone.  The desk was commissioned especially for the space and the chair is from the 1930s.  The Bagues chandelier dates from the 1940s. 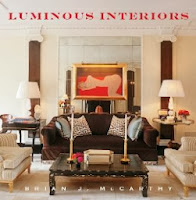 The book consists of Brian's interesting story of each project accompanied by lavish color photos, many full page, none of which are done justice here.  It is one knock-out image after another.  Although difficult to pick a favorite room, one of the most memorable is glimpsed in the first photo of this posting.  The turquoise lacquer paneling with gilt bronze banding was fabricated in the U.S. and then sent to Paris for finishing.
Brian had the mahogany Library boiserie for a new 30,000 square foot chateau on Long Island Sound made in Paris by Feau & Cie and finished by Atelier Meriguet-Carrere.  The painted ceiling, better viewed in other images, was also produced by the famous Meriguet workshop.
The Dining Room of the same Long Island mansion also features paneling from Feau & Cie.  The Wedgwood-blue and ivory scheme is accented with panels of mirrored glass painted with neo-classical motifs.

The Master Bedroom of the previously mentioned Regency Revival house features a Serge Roche-inspired, mirrored canopy bed.  The curtain fabric is better seen in other photos in the book; based on a design by Balenciaga, the motifs are appliqued and embroidered on voile over taffeta.
The Master Bathroom in the Ulster County, New York, weekend home that Brian shares with his partner Danny Sager follows the casual theme of the rest of the house.  But it also reflects his great appreciation for art and craftsmanship.  The chandelier crafted from plumbing parts was made by Thomas Blake.
Brian J. McCarthy will be making a much-anticipated appearance on Saturday, January 18, 2014, to speak at Memphis Brooks Museum of Art at 10:30 am.  Sponsored by Decorative Arts Trust, Brian will present a talk, "A Grand Tour of Design: Collecting for a Personal Home," giving advice on how to scout for objects while traveling and to collect pieces with great impact for one's own home.  A book sale and signing will follow.  The event is free to the public with regular museum admission and no reservations are required.
﻿
﻿
Posted by John J. Tackett at 3:37 PM 5 comments: