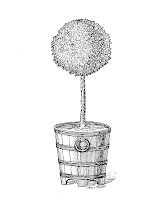 With a strong background in historic preservation, most of my architectural commissions involve improvements to existing houses or apartments.  It is a process that I enjoy, and I get great satisfaction from comparing successful "After" to the miserable "Before".  But I also design new houses.  Some of these new residences have not been realized, however.  Well, not yet anyway.  The Devoted Classicist thought readers might enjoy an occassional glimpse at these classic residential designs that will be place in the category New House Case Study.  A brief look will be presented on an infrequent basis, in no particular order, and arbitrarily numbered.  So here we go with the first, which we will call No. 1.

All of my houses, especially the new ones, have a strong connection to their landscape setting.  This house was designed to suit the site, a pie-shaped parcel in the curve of the road.  A former horse farm in a desirable area was being redeveloped for a variety of uses with this section being divided into small lots with houses close together.  This site was an exception, however, because it splayed so wide to the rear.  The small front was to be completely occupied by a circular motor court with the angled wings of the main block of the house embracing it, leaving a larger-than-usual gargen to be fully developed for the rear as the owners are avid gardeners.  The treeless pasture was essentially a blank slate.  All these perimeter parcels are walled, so the site would be essentially its own private setting despite the relatively small size.

The basic program for the house was similar of many in the suburbs.  There was to be four bedrooms with the Master being on the ground floor.  The square footage is about 2,700 square feet, not including a double garage.  The design intent was to provide a viable alternate to the typical subdivision house, offering studied proportions and scale for eye-pleasing, functional results at a competitive price.
Posted by John J. Tackett at 12:15 PM 15 comments: 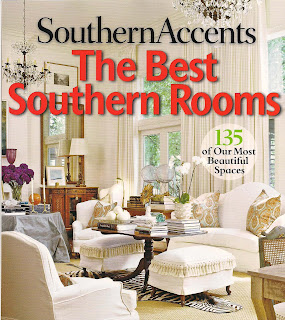 Although regular issues of "Southern Accents" magazine are no longer published, a special issue has been produced which they have called "The Best Southern Rooms, 135 of Our Most Beautiful Spaces".  One of my projects which was published in the magazine a few years ago partially reappears with the four rooms that follow.  Sadly, two of my favorite rooms of the house that were shown previously did not make the editorial cut this time;  I will include them in a future post, however.

I was planning an addition for the clients, recently married and living in the lady's charming 1920s house on a prominent corner lot on the boulevard of Belle Meade, the self-governing community to the west of Nashville.  A former owner had sold the rear garden, however, and set-back building lines for the corner severely restricted any addition.  When the house just two doors from the lady's close relative came on the market, it was decided to move instead of adding to the existing house as the new house had the required rooms for the growing young family and just needed some aesthetic improvements.  The new house was not new in age, but was a traditional, 1950s house, in the Leave-It-To-Beaver style with several extensive remodelings and additions over the years.  While it occupied a very large, desirable lot on a road of small estates, we were all suprised when the real estate transaction made the front page of the local newspaper;  the sale broke the county record for residential real estate.  (The area is full of houses much more lavish and attractive, but they were custom built and/or had not changed hands in years). 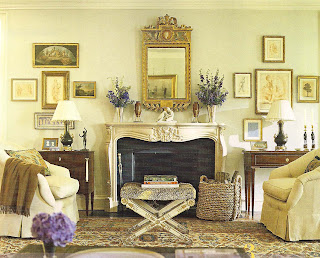 In the two story Entrance Stair Hall, I changed the staircase, but that is one of the spaces not included in this edition.  The Living Room, which is to the right of the entrance, stayed much as it was architecturally.  The Louis XV style chimneypiece was exisitng but in a very peculiar multi-colored marble which was faux painted to resemble limestone.  I designed a pair of large, comfortable upholstered chairs to flank the fireplace, but they are replaced in this photo with the Marshall Field models that were flanking the sofa opposite.  Hector Samada from my office hung the owner's collection of drawings.  The cabinet and table flanking the fireplace are Swedish antiques, just part of the owners' large collection.  In tandem with this project, I also helped them with their home in the equestrian community of Wellington, Florida, and we travelled to Stockholm to search for additional furnishings for the two projects. 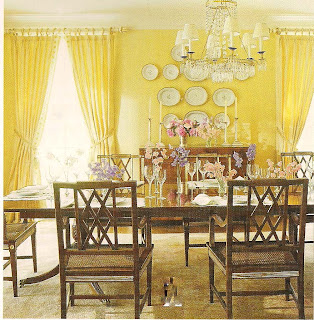 In the adjacent Dining Room, a Swedish chandelier hangs over the table surrounded by Russian neoclassical armchairs.  The opposite wall is actually more interesting as it is covered with a huge framed drawing, a "cartoon" of a Rubens tapestry.  My only architectural improvement to this room was to add an actual door, double-acting, to the trimmed opening to the adjacent serving pantry, blocking the view to that space, the Breakfast Room and the Kitchen beyond that had previously been just one long shot through the house. 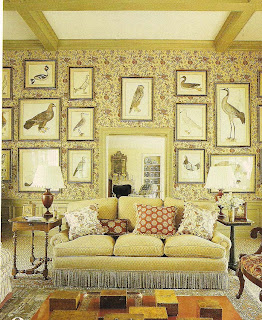 My architectural improvement to the Family Room was to decrease the width of this opening to an adjacent Sitting Room;  it was formerly 16 feet wide.  The enormous steel beam in the load-bearing structual wall had to remain, so the opening height remains as existing or I would have preferred to raise it.  Josie McCarthy collaborated on this project and chose the wonderful printed linen that covers the walls (and matching curtains, not seen), as well as many other invaluable contributions.  Again, Hector Samada hung the framed prints, all birds of prey, a collection numbering almost 30 that covered the Entrance Hall walls and up the stairs of the previous house.  I designed most of the new custom made lampshades, including these for the great pair of red tole lamps from Colefax and Fowler, found on a shopping trip to London, that were specially re-wired to also include an uplight to bounce illumination off the high ceiling. 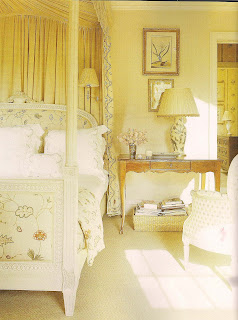 In the Sleeping Room of the Master Suite, I laid out the pattern of the Chelsea Editions embroidered linen fabric to utilize the scalloped border for the bed hangings of the Louis XVI style bed.  Josie and I both like to use side tables or chests rather than typical bedside tables that so often are newly made too low for a traditional bed's mattress height.

It was a fun project, especially interesting for me because of the improvements I was able to make to the architectural aesthetics of a house lacking refinement, yet held in high regard by the general public.
Posted by John J. Tackett at 1:09 PM 17 comments:

Classicism: It's Not Greek To Me 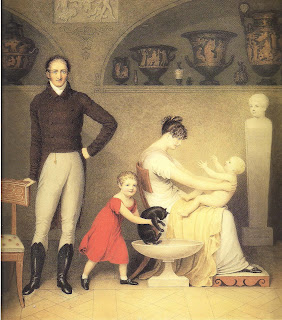 Yesterday, The Devoted Classicist had the great honor to present his talk "Classicism:  It's Not Greek To Me" to the Belle Meade Garden Club.  Showing examples of my work, I explained what an influence classicism has in my designs for architecture and furniture.  Because of the specific audience, I geared my comments more towards the ways that the houses relate to the landscape setting.  Many thanks to the program's hostess, interior designer Linda Kay McCloy, for the invitation to speak and making possible such an elegant luncheon reception afterwards. 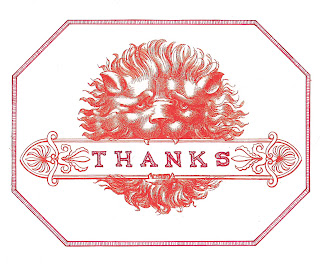 The Devoted Classicist offers belated but sincere thanks to Helen Young of the Whitehaven blog, http://whitehaveninteriors.blogspot.com/ for recognition with the Stylish Blogger Award.  Along with her business partner Jane Douglas Reynolds, Helen owns an Atlanta interior design firm called Whitehaven.  Both live in a white clapboard house that was either renovated or built in the past few years, hence the name.  My favorite feature of the blog is the House of the Week;  every Monday, an interesting home, usually an Atlanta classic, is presented.  Like all of my blog followers, with the exception of two, I have never met Helen or Jane Douglas.  But it is fulfilling to have regular readers of the blog, people with similar interests, from around the world.

With the honor comes the request to provide personal facts that few people know.  My second post covers a lot about my background that would possibly interest readers, but here is a bit more:
Again, many thanks to Helen Young of Whitehaven for the Stylish Blogger Award, and thanks to all my Followers for your continued support. 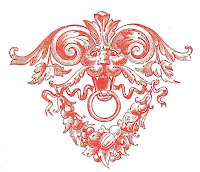