Another office neighbor's purging of reference files has yielded more images of the Miami Beach house that Valerian Rybar decorated for Claudette and Murray Candib.  Looking like a neo-classical villa on the Riviera, the project with partner Jean-Francois Daigre was featured in the April 1987 issue of Architectural Digest.  The stylish chairs in the handsome lattice-paneled Dining Room were featured on a previous post of The Devoted Classicist.
﻿ Clearly, Rybar was not big on choosing furnishings from a catalog;  he mixed carefully selected antiques with his own custom-designed cabinetry and upholstery.  In the Living Room, a central bourne was fabricated with a scagliola top that accommodated table lamps to supplement the light from a pair of crystal and bronze doré chandeliers.
﻿ The Loggia benefits from classic Florida architecture, walls in blocks of coquina stone and a paneled, white-washed wood ceiling (which appears to be cedar or cypress).  The modular seating in Ottoman form has stylized paisley upholstery fabric in gray and burgundy, an effect later to be diluted with less-expensive versions but this was not as familiar at the time.  The same goes for the pleated shades.  And it was not long before knock-off Coromandel screens diminished the value of the antique lacquer panels.  But at the time, this room with pots of huge orchids was chic. 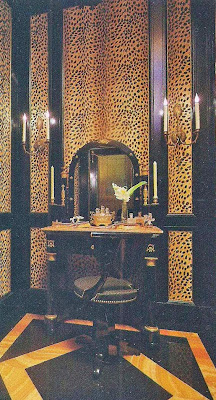 "I told Valerian I wanted something very different," Claudette Candib was quoted to say about the Powder Room.  Although animal prints are commonplace today, wall panels of jaguar velvet framed with ebonized wood certainly had to be unexpected in Florida.  An ebony Empire coiffeuse paired with a sculptural chair of the same period with a black horsehair-covered seat added glamor to the space as well.
﻿ In some terms, the Library was one of the more conventional rooms in the house. Handsomely paneled, an animal-print carpet furthers the black and gold scheme for comfortable upholstered seating, a Louis writing desk, and a lacquered low table probably designed by Rybar.
﻿ There was no lack of drama for the decoration of the Master Bedroom, however. Rybar designed a canopy in a variation of a lit à la polonaise with supports as stylized palm trunks.  An Ottoman style bench at the end of the bed undoubtedly concealed a pop-up television.

Self-described as "the world's most expensive decorator,"  Rybar's published projects were not universally praised although the firm never suffered from a lack of potential clients with the means to have a gasp-inducing interior.  The most interesting lesson today, however, might be the design professional's ability to carry through with a theme and leave no aspect of decoration without consideration.  The idea of Total Design for interiors has lost appreciation in these past years, but there seems to be interest growing again, no?