October 13, 2015, marked the launch reception for the new book PARISH-HADLEY TREE OF LIFE: AN INTIMATE HISTORY OF THE LEGENDARY DESIGN FIRM by Brian J. McCarthy and Bunny Williams.  The Devoted Classicist, John Tackett, a contributor, was an honored guest along with the thirty others who have a chapter in the book.  The reception was held in the glorious Manhattan townhouse that is home to the noted antiquarian Carlton Hobbs at 60 East 93rd Street.
﻿
That block between Madison and Park Avenue is one of my absolute favorites, the site of several of the city's most distinctive townhouses.  Number 60 was designed by architect John Russell Pope and completed in 1931 for Virginia Fair Vanderbilt.  Heir to the fortune her father made from the Comstock Lode and Big Bonanza mine, she was married to William Kissam Vanderbilt, president of the New York Central Railroad, until 1927.  Despite the financial reverses of many during the Great Depression, there were no economic hardships for "Birdie," as her friends called her, who divided her time between this house, another on Long Island, and a third in California.
﻿
The house replaced three rowhouses and was built of limestone.  There are three principal floors but the service areas are on seven stories of shorter ceiling heights within that space.  Originally, there were four 18th century paneled rooms (one was removed by a subsequent owner) with antique parquet floors (replaced after occupation by a school).  Decorative hardware in the antique style was made by Bricard in Paris.
﻿
After Virginia Fair Vanderbilt's death at age 60, the house was bought Bryan and Thelma Foy, she being the very stylish and rich daughter of auto manufacturer Walter Chrysler.  Then the house was occupied by the Romanian Mission to the United Nations before being bought by the Lycee Francais.  Carlton Hobbs bought the 50 room mansion for about $10.5 million in 2002 and spent two years in restoration.  Read more about the house in a past post of Daytonian in Manhattan.
﻿
In addition to seeing the interior of the house, it was a great treat to see some of my old friends and colleagues and meet new ones.  In addition to Brian and Bunny, who were there with their respective spouses Danny Sager and John Rosselli, there was Thomas Jayne, Michael Whaley (and wife K.T.), David Kleinberg, Nicholas Miles Pentecost, Libby Cameron, Kim Cruise, Nancy Porter, Carol Cavaluzzo, John Murray, David McMahon, and Paul Engel.  And it was so good to see Mark Ferguson with business partner Oscar Shamamian with their wives Natalie Jacobs and Llewellyn Sinkler.  Parish-Hadley "alumni" after my tenure included Douglas C. Wright, Todd Klein, James Andrew, and Thom Filicia.
﻿
It was a great pleasure to see Peter van Hattum the spouse of the late Harold Simmons, my former "boss" who was such a great teacher.  And also attending was former employee from the early days of Parish-Hadley, Suzanne Earls Carr.  Sue introduced me to her guest, Bruce Budd, the esteemed designer who had worked for the late tastemaker Bunny Mellon; what a treat to meet such a talented gentleman!  Also in attendance was former Parish-Hadley client and great friend of Albert Hadley Rene Meyers who is practically part of the alumni group. One of my favorite decorative painters, Chuck Fischer, was there; he also has authored some fantastic pop-up books with his illustrations literally springing to life throughout the book.  And I spoke briefly to author of several books on famous decorators Stephen Salny.  Of course, there were many, many others and I am sure I am leaving someone out.  But it was fun and a good time was had by all.  Thanks to our host Carlton Hobbs and literary marketing & branding agent Jill Cohen with associate Lizzy Hyland.
Posted by John J. Tackett at 11:19 PM 12 comments:

Hermes Mallea and the Great Houses of Havana

All Devoted Readers within driving distance will not want to miss an upcoming talk about the great houses of Havana by architect/interior designer/author Hermes Mallea.  This event is just one part of the 35th anniversary celebration of Decorative Arts Trust, a support group of Memphis Brooks Museum of Art.  Hermes' presentation will be Saturday, October 17, 10:30 am in the museum auditorium in Overton Park, 1934 Poplar Avenue, Memphis, Tennessee.  The talk is free and open to the public.  A book sale of both THE GRAND HOUSES OF HAVANA and ESCAPE: THE HEYDAY OF CARIBBEAN GLAMOUR, with proceeds benefiting D.A.T., will follow the talk along with a book signing by the author. 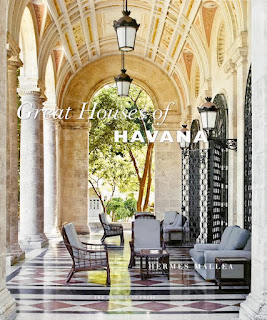 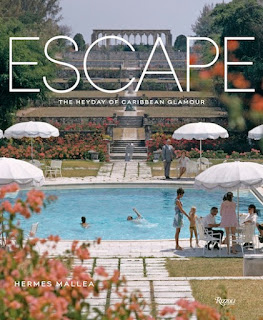 And be sure to allow enough time in your schedule afterwards to view the current exhibition which features over 100 items donated to the museum collection by Decorative Arts Trust and its members.  For more information, see the Trust's website.
Posted by John J. Tackett at 9:25 PM 5 comments:

I have known all about Brooke Astor's Money Room, a famous space now revered by traditional decorators and architects, for 35 years.  Blessed with the classic proportions of a top Pre-War Park Avenue apartment building and given more than just a bit of help by knowing what to play up and what to play down, the expertly edited room was a great influence on this impressionable twenty-something.  But by the time of my tenure, however, it existed only in this one transparent image below, part of a slideshow presented to Parish-Hadley clients on occasion to illustrate a point.
Mrs. Astor had given the name to a room in her apartment where she determined the beneficiaries of cash gifts from the Astor Foundation charities as well as from her own fortune provided by her late husband, Vincent Astor (son of RMS Titanic victim Jacob Astor).  The room was on the lower level, originally a separate full-floor apartment and later joined to her own with the insertion of an interior staircase.  Brooke Astor was about to leave on a trip the next day when she told Albert Hadley that he could redecorate the Drawing Room of her mother's former apartment if the work could be completed by the time of her return in only two weeks.  The whole Parish-Hadley office immediately sprang into action the next day along with their team of tradespeople and workrooms.
﻿
The room was emptied and the furniture sent out for re-upholstery.  The walls were painted with a subtle yellow marble finish but the most memorable feature was the floor; the herringbone parquet floor was scraped and stained in two tones of varying zig-zag stripes, an innovation at the time.  An often over-looked feature of the room was the curtains hanging from big gilded rings on wood poles.  The curtain fabric, and the whole point of telling the story here, was a custom pattern that Mr. Hadley had just designed.  It was printed with a large scale, "Tree of Life" motif that resembled stylized embroidery in brown on natural linen.  The whole team labored diligently with designers Kevin McNamara, Bunny Williams, and Harold Simmons working late on the Sunday night arranging books and hanging pictures before Mrs. Astor's return the next day.  The room was a huge success but virtually unknown to the rest of the decorating world outside Parish-Hadley until it was published in 2005.
﻿
This and many other stories about the company are told by thirty-one former employees in the new book released today, October 6, 2015, PARISH-HADLEY TREE OF LIFE; AN INTIMATE HISTORY OF THE LEGENDARY DESIGN FIRM.  As those who worked there earned the equivalent of an advanced degree in design, they are known as "alumni."  In an unusually high number of instances, the "graduates" went on to found their own firms.  Examples of their work, influenced by their Parish-Hadley education, illustrate the book.
﻿﻿﻿﻿
Brian J. McCarthy had the idea for the book which had Albert Hadley's blessing before his death in 2012.  (Sister Parish died in 1994).  Bunny Williams volunteered her help in making the book a reality and they are listed as co-authors.  But co-editors would be more accurate as each chapter is told in the words of an alum.  In addition to chapters by Brian and Bunny, other well-known designers such as David Easton, William Hodgins, David Kleinberg, Michael Whaley, and Thomas Jayne relate their experiences at Parish-Hadley.  Plus there are others -- no less talented -- such as John Tackett, known to you all as The Devoted Classicist.
Not wanting to spoil the experience for those who will read the book, the decision was made not to reproduce any of the images from the book for this post.  As might be imagined, the book could have been published as several volumes but was eventually reduced to a usable 288 pages.  So here are a few of the John Tackett Design images that had to be cut from the final product.
PARISH-HADLEY TREE OF LIFE: AN INTIMATE HISTORY OF THE LEGENDARY DESIGN FIRM can be ordered at a discount from The Devoted Classicist Library, an affiliate of Amazon.  And if you do not have the 1995 book PARISH-HADLEY: SIXTY YEARS OF AMERICAN DESIGN or the 2005 book ALBERT HADLEY: THE STORY OF AMERICA'S PREEMINENT INTERIOR DESIGNER, these can be ordered by clicking on the title.   For additional features of The Devoted Classicist blog, see the regular on-line/web version here.   See more examples of my work by going to LABELS on the web version and clicking on "John Tackett Design Portfolio."   Also, see the photos on the Facebook page of John Tackett Design.