An Albert Hadley BEFORE and AFTER for Brooke Astor

The brass-trimmed, red lacquer library that Albert Hadley created for Brooke Astor is one of the iconic examples of twentieth century residential design.  Although photos of the library were not published in this country until the 1990s, it has been the inspiration for countless reinterpretations and is etched in the mind of many devotees of both architecture and interior design. But relatively few know how the room appeared before the transformation.


Albert Hadley tells the story of how the new room came to be in Albert Hadley, The Story of America's Preeminent Interior Designer, so I will not repeat it in detail.  But the summary is that Mrs. Astor wanted to improve the room and Mr. Hadley proposed making it into a true library that showcased her late husband's collection of books. 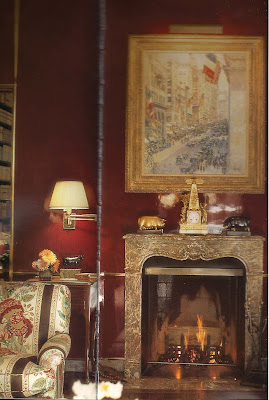 The existing 1920s interpretation of Louis XV boiserie was glazed a light honey color with portions comprised of shelving;  it was completely removed, and the room gutted.  The antique rouge royale chimneypiece was reused along with the furniture and the antique rug. 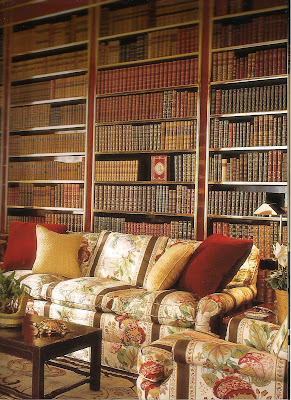 The sofa and upholstered chairs had recently been done by Sister Parish in the classic chintz by Brunschwig & Fils "Portuguesa" in the colorway with brown stripes with stylized red flowers.  So even the fabric remained on these primary pieces that coordinated so beautifully with the rug. 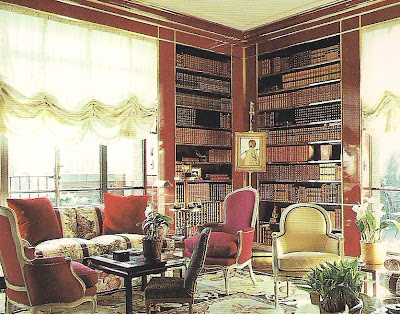 Although the architectural details are simple, the execution of the brass trim is faultless and it provides such a brilliant contrast with the gilt stamped leather book bindings.  The rich red lacquer finish, the result of ten coats of paint, ties it all together.  Mrs. Astor was quoted as saying this was her favorite room and Albert Hadley, the same. 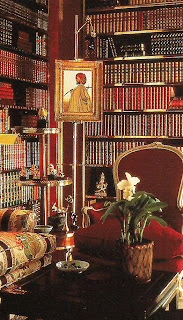 The Childe Hassam painting over the fireplace Flags Flying on Fifth Avenue became involved in controversy when son Anthony D. Marshall sold it for $10 million and took a $2 million commission.  He was convicted of grand larceny and sentenced to one to three years in state prison in 2009, but has been released on bail pending appeal. 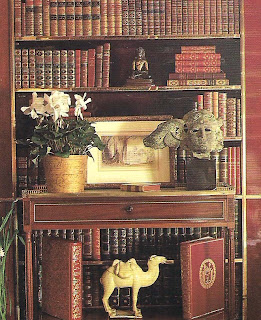 The Devoted Classicist attended Brooke Astor's 90th birthday celebration and predicted she would live to see her 100th.  She died in 2007 at the age of 105.

The apartment, which once was connected to her mother's residence, consisted of five bedrooms, 4 1/2 baths, five fireplaces and six terraces on the 15th and 16th floors of 778 Park Avenue, was originally priced at $46 million.  It finally sold in February, 2011, for $19 million to Daniel Forcart, 47, a Swiss investment manager in currency trading.

The wonderful 2005 book ALBERT HADLEY: THE STORY OF AMERICA'S PREEMINENT INTERIOR DESIGNER by Adam Lewis can be purchased at a discount of 37% off the published price through The Devoted Classicist Library by clicking here.
Posted by John J. Tackett at 3:38 PM