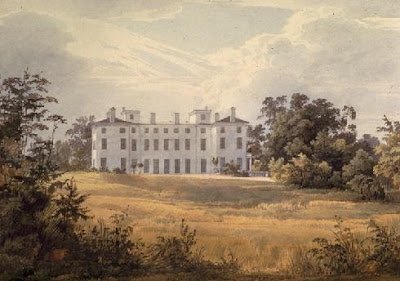 Not so many outside the Mid-Atlantic region seem to be aware that Joseph Bonaparte, former King of Spain and the Indies (and King of Naples before that) and elder brother of Emperor Napoleon Bonaparte I, lived in the United States as the Comte de Survilliers.  There were large numbers of artists and craftsmen who came to this country seeking opportunities, but Mr. Bonaparte, as he was sometime called, was one of the most significant of the emigres to become a catalyst in bringing European culture to early 19th century America.
Abdicating the Spanish throne after the defeat of French forces to the British in the Battle of Vitoria in 1813, he returned to France.  But with an 1816 French law banishing the Bonapartes from France, Joseph Bonaparte and his party (minus his wife) sailed to New York incognito.  After a time in New York City and then Philadelphia, Joseph Bonaparte became enamored with the countryside of western New Jersey and bought an estate of 211 acres called Point Breeze in Bordentown, near the confluence of Crosswicks Creek and the Delaware River for $17,000.  Reportedly financed with the sale of some of the crown jewels of Spain, Bonaparte was comfortably ensconced in a mansion with his fine and decorative arts collections, library, and entourage.  The Count was known as a generous, gracious host, entertaining guests both local citizens and friends who were some of the most distinguished men in the country.
Bonaparte sometimes lived in Philadelphia during the winter and became close friends with Stephen Girard, General Thomas Cadwalader and Joseph Hopkinson, president of the Pennsylvania Academy of Fine Arts.  The Bonaparte estate became a cultural center and often guests were rowed up the Delaware River in a sixteen-oar barge, given to the Count by Girard.  Enlarged to 1,800 acres, the property was improved with trees planted, twelve miles of bridle paths and carriage drives added, and an arched brick causeway across a man-made lake was constructed, all at a cost believed to be over $300,000 (over four and a half million in today's dollars).
A fire in 1820 caused great destruction to the mansion, but many furnishings were saved and a new house was constructed.  Some accounts say that the former stables near the road were incorporated into the new house with even more opulent rooms than before including a grand staircase, a state dining room, and a library, all decorated with paintings by Velasquez, Rubens, Canaletto, Murillo, Rembrandt and DaVinci.  In addition, there was a 'Statuary Room' containing antique bronze castings from Pompeii, a "Young Diana and Hound" by Bartolini, a figure of "Ceres" and "A Female Figure in Roman Dress" both by Bosio, and several busts of the Bonaparte family members by Conova, according to the E. M. Woodward book BONAPARTE'S PARK AND THE MURATS.
The Woodward book includes a passage by a visitor who had the privilege of viewing the Count's summer sleeping apartment.  "It consisted of a chamber, dressing and bathing-room, with a small studio, or rather boudoir.  The curtains, canopy and furniture were of light blue satin, trimmed with silver . . . The walls were covered with oil paintings, particularly of young females, with less clothing about them than they or you would have found comfortable in our cold climate, and much less than we found agreeable when the Count, without ceremony, led us before them, and enumerated the beauties of paintings with the air of an accomplished amateur".
The Count went to England for a period, 1832 to 1837, to be closer to France as he was Pretender to the Throne, but returned to Point Breeze 1837 to 1839 before again journeying to England and then to Florence to be reunited with his wife who he had not seen in twenty five years.  Julie Clary Bonaparte forgave her husband's indiscretions. (He had a mistress, Annette Savage, who gave birth to a daughter in 1821 and again in 1822;  one died young and the other later married Colonel Zebulon Howell Benton.  Annette, however, was sent from America with a pay-off to not publish her memoirs).  Joseph Bonaparte died in 1844 and was finally laid to rest in Paris at Les Invalides in 1862 during the rule of his nephew Napoleon III.
Point Breeze was inherited by his grandson Joseph Lucien Charles Napoleon who held two spectacular auctions of the furnishings before selling the property in 1847.  The lots brought high prices according to accounts, with successful bidders proud to own a part of the classical collection that had once belonged to Joseph Bonaparte.  The sales included upholstered furniture, elaborate curtains, extraordinary gilt light fixtures and large gilt pier mirrors.  Two of the pieces documented from the sale, a pair of "very rich mahogany Side Tables, supported on Egyptian columns, with black marble top and heavy gilt ornaments, (from France.)" were purchased by the Hopkinson family and now belong to the Philadelphis Museum of Art.
Point Breeze was purchased by the British consul at Philadelphia who had the house razed and replaced by an Italianate villa.  There were several other houses on the estate, one that housed daughter Zenaide and her husband Prince Charles Lucien.  (Daughter Charlotte also stayed on the estate at times, but there is no record of her having her own house).  Another housed Bonaparte's trusted secretary Maillard and served as a gatehouse.  In 1970, the property was bought by the Divine World Seminary.

Though now just a memory, and a faint one at that, Point Breeze is a notable example of what was once a dynamic center of culture and influence, exposing European tastes to New York and Philadelphia patrons who, in turn, patronized cabinetmakers such as Charles-Honore Lannuier, Joseph B. Barry, Michel Bouvier, and Anthony G. Quervelle.