Pick up just about any design/shelter magazine and it is clear that the art of picture hanging is just that -- an art, not to mention a talent that is often under appreciated.  But a great master in the arrangement of pictures is Alec Cobbe, a painter-designer-musician who lives at Hatchlands Park, a National Trust property in Surrey, England.
Cobbe sees both the paintings and the furniture as integral to the whole interior decoration scheme.  He has been a pioneer in the revival of awareness of how paintings have been hung in the past.  He contends that in any collection there are stars, and levels of quality down from that.  It is important to put the best pictures in prominent locations and then group the others to benefit.  "Quality, size and subject matter are all important," Cobbe was quoted to say in an interview for the March 1996 issue of Architectural Digest.  "It's no use having an ideal hang in mind, then lamenting that the collection doesn't fit the glove.  It's a question of manufacturing a glove that fits."
﻿ Alec Cobbe also said, "In a room of architectural merit, you can't ignore the volume, the dimensions.  Rehanging pictures can change your entire perception of a space.  Until 1900 it was considered normal to hang densely -- three, even four tiers deep -- something architects must have had in mind when they designed tall rooms.  The twentieth-century reaction to Victorian clutter has encouraged us to hang pictures in isolation.  They may gain clarity and be seen in better light that way, but they do lose their original architectural role."
﻿
The red walls of the Salon came to be when Cobbe learned that the red silk in one of the galleries of the Wallace Collection was being replaced and he could have it if he took it away immediately.  Red is the traditional background for old-master paintings.  The ceiling of the Salon had already painted and gilded, but Cobbe introduced dark blue paint into the frieze to give it the visual weight that was needed.  It was not a historical judgment, but rather an aesthetic one.
Although the original owner, Admiral Edward Boscowen had hired Robert Adam for the interiors, some elements were never realized and others were changed in the nineteenth century.  So Cobbe did not treat the interiors as a late eighteenth-century Adam restoration.  Originally the dining room, the red Salon features a 1758-60 Adam chimneypiece.
﻿ In the Dining Room, Cobbe designed arabesque panels which he painted with the help of his assistants.  Cobbe explained, "The sources of the scheme include Girard's work for the prince regent at Carlton House."
﻿ Cobbe chose light gray and gold for the walls of the Drawing Room to give it a slightly French feel.  The details of the paneling are very fine and the Erard pianoforte made for Marie Antoinette is there, adjacent to the fireplace.  Note that the larger paintings are hung from chains suspended from brass rods.  Art lighting here and in the Salon is from wall-mounted, goose-neck picture lights with shades of a shell motif. 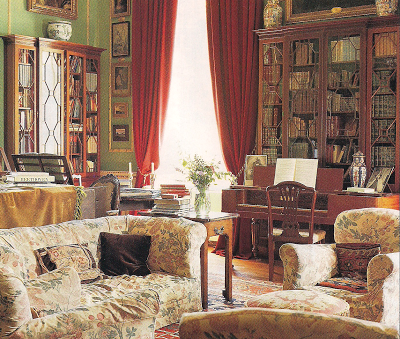 The walls of the Library are green, Cobbe says, because "that's a good color for a room where one would want to sit, read, and drink coffee," he says.  "And I never do one flat color, but endless washes of thin color until the depth is right."
﻿ Part of Cobbe's collection of paintings, watercolors, and drawings that he had done himself over the years is displayed in the Hall.
﻿ I met Alec Cobbe when our Attingham class visited the house.  After Hatchlands Park had been presented as a gift, largely unfurnished, to Britain's National Trust, a deal was made with Cobbe, known from projects he had worked on for the National Trust, to become a tenant and refurbish the interiors for his studio, design offices, and residence.  The grand rooms of the main floor are open to the public on a limited basis and house his collection of about forty historic keyboard instruments in a domestic museum setting.  Cobbe played many of the instruments for my class, including pianos that had belonged to Mahler, Bach, and Chopin, music that was composed on the very keyboards in some instances.
﻿﻿ Concerts are sometimes given in the Music Room by Cobbe and other musicians.  The domed space was a1902 addition designed by architect Reginald Blomfield who also designed the organ case.

As a footnote, Devoted Readers will appreciate that David Mees, former assistant to Alec Cobbe, has a most interesting blog, Mad About Interiors.