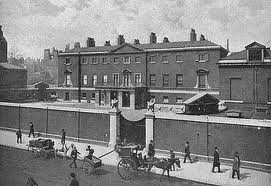 Last week, when Simon Seligman gave his brilliant talk, "Custodians, Collectors, and Tastemakers:  The Duchesses at Chatsworth", to the members and guests of Decorative Arts Trust (see the October 6, 2011, post), he touched on Devonshire House, the magnificent London home of the Duke of Devonshires that was once the center of the Cavendish family dynasty.  The Devoted Classicist remembered an article from an issue of "Country Life" last year on the occasion of the 'attic sale' by Sotheby's at Chatsworth.  The interior architectural details of the state rooms had been stored in the Chatsworth stables for almost 90 years after Devonshire House was demolished.  Whole rooms were carefully dismantled, labeled, and stored, with the hope that the interiors could be someday incorporated into a new building.

Devonshire House was built by the 3rd Duke in 1733-34 on the Piccadilly site of Berkeley House, the 17th century residence that burned the previous year.  The new house with a severe classical brick exterior and grand classical interior was designed by William Kent, 1685-1748, and built on the foundations of the old house.  (Kent was a protege of friend and neighbor, the Earl of Burlington.  The Duke's son later married Lord Burlington's daughter, Charlotte Boyle, and inherited Chiswick Villa a Neo-Palladian masterpiece that was a design collaboration by Burlington and Kent).
The ground floor contained an Entrance Hall, accessed through a porte-cochere, and service rooms.  The main floor above, a piano nobile, contained eleven lavishly decorated state rooms reached by a spectacular curving marble staircase with a gilt-metal balustrade and a crystal handrail;  this 1853 Empire addition was designed by architect Decimus Burton who was also responsible for the portico.
Two drawing rooms were combined during the occupation of the 6th Duke, using the decorating firm Federick Crace & Son to create a ballroom.
The Saloon, on the front of the house overlooking Green Park, was also redecorated by Crace with trompe l'oeil painting on the high coved ceiling above blue and gold silk covered walls with elaborate gilt framed mirrors.
The Dining Room featured portraits within architectural frames incorporated into the paneling.  A robust William Kent console is shown with a later table and chairs dating from the Crace redecoration.
During the occupation of the 5th Duke, the private apartments were remodeled by architect James Wyatt for the house's most famous occupant, the legendary Duchess Georgiana.  The 5th Duchess, 1757-1806, was the undisputed leader of London style, fashion, and society, painted by Gainsborough, Reynolds, and Cosway.  A close confidante of Marie Antoinette, the Duchess shopped in Paris just weeks before the storming of the Bastille.  A set of eleven caned chairs, believed to be similar to the pair of settees from Chatsworth and included in the auction, were commissioned from Francois Herve, the noted Huguenot cabinet maker of the George III period.  (Georgiana was portrayed by Keira Knightly in the 2008 film "The Duchess").

The house was occupied by the Red Cross during the First World War, and sold to a property company in 1919 to help the 9th Duke pay Death Duties of GBP 500,000 plus the debts of the 7th Duke which he also inherited.  But a condition of the sale was that if the house was demolished and replaced by an apartment building of the same name, all the interior architectural details reverted to the Devonshire/Cavendish family.  In 1925, the fittings were carefully dismantled and sent to storage at Chatsworth.  Evelyn, Duchess of Devonshire, oversaw the recording and removals, reinstalling the art at Chatsworth and seeing that the salvaged details of one of London's most famous mansions were preserved.

Across from the Piccadilly entrance to Green Park, the entrance gates and sphinx-topped piers are all that remains in place from historic Devonshire House with the exception of the Wine Cellar, now the ticket office of the Green Park Underground Station.  More about Devonshire House can be read here on the remarkable website The DiCamillo Companion.  Curt DiCamillo's site includes a database that is a continuing effort to document every country house in Britain and Ireland, plus, and this is invaluable to this writer, a Pronunciation Guide.
In an October, 2010, three day auction which also included items in storage at Chatsworth that were from other Devonshire family properties, almost $10.3 million was raised, selling 20,000 items in 1,400 lots.  The top lot was a circa 1735 marble chimneypiece (similar to this one pictured above) attributed to William Kent which was estimated at GBP 200,000 - 300,000 and fetched GBP 565,250.

The black & white interior photographs were taken by "Country Life" in 1914 before the house was closed and were reprinted, along with the color cut-away illustration, in the August 25, 2010, issue of the magazine.  More information about subscriptions to the magazine can be found at www.countrylife.co.uk/.
Posted by John J. Tackett at 12:53 PM